His Royal Highness Crown Prince Alexander II accompanied by HRH Prince Philip and Mr David Andrews attended today the Serbia Investment Day 2014 at Central Hall Westminster in London, United Kingdom. This major economic and political event was organized by the Government of Serbia, in order to present Serbia as significant international business destination to investors from the United Kingdom and others in one of the world’s business capitals. 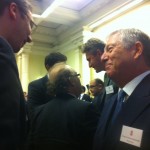 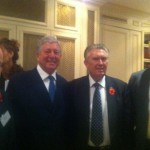