The work of Vladeta Piperski is reflected in realistic scenes of intimately designed sculptures. Such artistic expression produced small format sculptures in bronze, which can be found in the art collection of Dedinje Palaces in Belgrade. Figures in motion, or with some details like the swirling draperies, give a kind of dynamism to the works’ composition structures. On the other hand, solid works’ compositions, which are revived by the aforementioned dynamics, create a kind of immediacy that is imbued with realism, which are characteristic for Vladeta Piperski’s mature phase of work. His open and simple forms were the expression of a profound sensibility that he materialised through plastic. Pursuit of intimate, real and social, as the basic stylistic features of these works, classify them in the fourth decade of the XX century.

Vladeta Piperski was born in 1908, in Valjevo. After high school he enrolled an art school in Belgrade and attracted attention as one of the most talented students of Petar Palavicini. It is his early works that were imbued with a strong note of Palavicini’s expression. After completing his education, Piperski approached a group of progressive artists and tried to orient his activities in that direction. His style was inspired by social issues. He exhibited at group exhibitions from time to time in Belgrade. During World War II, he took active part in the PLW. He spent his last days in captivity in Sabac in 1942.

Piperski was primarily oriented toward portraits (Father’s head, Portrait of a girl with curls, etc.), but his surviving works show that social concerns were also represented (Young worker, Seamstress…) 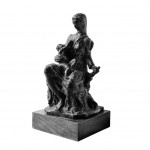 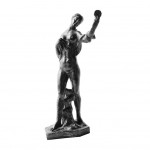