HRH Crown Prince Alexander greeted today Ph.D. Nebojsa Kuzmanovic, the Director of the Archive of Vojvodina in the Royal Palace.

The occasion for this meeting was the book “Apotheosis to HM King Peter I Karadjordjevic” by Mr. Dejan Tomic, which was published in September this year in cooperation between the Archive of Vojvodina, Prometheus Publishing Company, Literary Cooperative of the Serbian National Council, and the Endowment of King Peter I. Mr. Kuzmanovic gave the book as a present to Crown Prince Alexander, together with many other precious books that are the result of the work of the Archive of Vojvodina.

“I am very happy to see that the memory of my great-grandfather, HM King Peter I is being preserved and that he is remembered and honuored even today, 100 years after his death. And it is very important that it is supported by the Archive, as an institution that is the guardian of identity and culture of memory of our people.

I am not speaking only as his descendant, but also as an objective viewer of our glorious history, when I say that King Peter I was truly a great ruler of our country. He was a great soldier, the King Liberator, who brought us great victories in war, but also the first constitutional ruler in peace, who is remembered as a European liberal and a true democrat. Equality of all, justice, and rule of law were the ideals and principles that led him. All that, together with the great love and respect he felt for his people, and which was mutual, made him a guide to us all, a milestone for a better future.

I am very grateful for this book and for its contribution to preserving a memory of my ancestor”, said Crown Prince Alexander on this occasion. 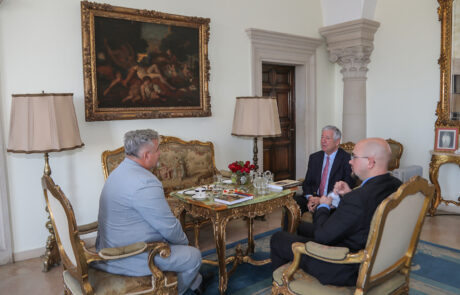