This work by Lojze Spacal entered the collection through the Office of the President of the Republic after 1953.

Graphics Suburb of Trieste belongs to the artist’s creativity period when he created his own expression (about 1950). From the initial stages of artistic creativity that had evolved under the influence of Surrealism, through expressive socially oriented realism, Spacal came to the strict geometric forms.

This work is characterised by its geometrical arrangement of stylized forms, flat projected plane, where the third dimension is given only in outline. Thus the entire work looks like some kind of optically generalized reality.

Lojze Spacalwas born in Trieste. He began painting in the early thirties, during a political confrontation, when he was in Basilicata in southern Italy. After passing the professional exam for drawing teachers in 1934, he began working in a high school in Trieste. He continued his studies at the Istituto Superiore d’Arte in Monza and at the Brera Academy in Milan. At the beginning of the fifth decade he had two solo exhibitions (Trieste in 1940 and Milan in 1942) that had a significant impact on his artistic affirmation. His participation at the Venice Biennale in 1948, 1954 and 1958, set him to a leading position in the Italian, but also European graphics. His work had been awarded numerous international and European awards (Citta di Roma 1955, first prize for drawing and printmaking at the 29th Venice Biennale and the first prize at the Third International Bienniale of Prints in Ljubljana, 1959). In addition to graphics and painting, he did abstract sculpture, decorating ocean liners, wall fresco painting (the church in Gradno in Slovenia), mosaics (Palace of cooperative associations, Ljubljana; Venetian house in Koper). 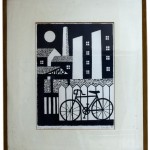