The students from the International School of Belgrade, the British International School, the German International School, the Anglo-American International School, Primary and Secondary school “Rudjer Boskovic” and Russian school in Belgrade had the opportunity to listen to the professional tour guide who told them interesting facts about the history of the Palace and the works of art that adorn it, as part of the Royal Compound tour. The students had the chance to share the spirit of charity by donated gifts to their peers from Serbian orphanages. The idea was that the children learn about charitable activities and how to help their peers from homes for children without parental care, children with disabilities and Roma children. The gifts that the students generously donated to their friends will be presented at the traditional Christmas receptions that Their Royal Highnesses Crown Prince Alexander and Crown Princess Katherine organize at the White Palace in January. 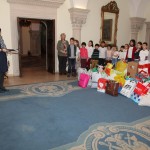 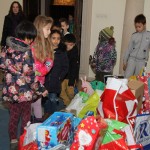 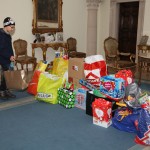