Their Royal Highnesses Crown Prince Alexander and Crown Princess Katherine hosted the opening of the exhibition “General Mihailovic – the First Freedom Fighter in Occupied Europe” at the White Palace in Belgrade tonight. The reception at the White Palace was prepared in honour of the premiere of the film “For King and the Country” by Rados Bajic.

Welcoming the guests, HRH Prince Alexander said: “It is a great pleasure for my wife and me to welcome you this evening at the opening of the exhibition “General Mihailovic – the first freedom fighter in occupied Europe“, set by Mr Dusan Babac, the member of the Privy Council.  The opening of this exhibition coincides with the premiere of the film “For King and Country” and I wish to especially thank Mr Rados Bajic for his exceptional work of art. In April 1941, Colonel Mihailovic, with several hundred officers and men, created the first resistance movement in the Second World War, not only of Yugoslavia, but of all Europe. Just as he was the first to resist German occupation, General Mihailovic was the first to fight against the brutal communist dictatorship. The process of his legal rehabilitation began in 2006 and I sincerely hope it is going to be finalized very soon. National reconciliation may rest only on truth, correction of injustice and forgiving. Historic processes and persons are examined for many years and certainly “generations judge deeds”. Our country needs more unity, fairness and justice for all. Let us pray for all those who lost their lives on all sides!” said the Crown Prince.

Addressing the audience, the author of “For King and Country” Mr Rados Bajic said: “At the end of the hard and thorny road on which I found myself, I guess by the will of God – after a ten-episodes of the TV series “Ravna Gora”, whose wings were cut short just as it lifted off – the film “For King and Country” is my farewell to the theme which for more than seven decades was forbidden, marginalized and buried in lies, single-mindedness and dishonour. I am saying goodbye, although we’ve only just begun. When I see you tonight, in such great numbers, with hearts open for truth and justice – I do not regret what I started” – said Mr Bajic.

The special honour to the opening of this exhibition was the attendance of HE Mr Heinz Wilhelm, ambassador of the Federal Republic of Germany to Serbia.

Their Royal Highnesses Crown Prince Alexander and Crown Princess Katherine will attend tonight at 8:30 pm the premiere of “For King and Country” at the Sava Centre in Belgrade.

After the projection, the audience will be addressed by His Royal Highness Crown Prince Alexander, who will award Mr Rados Bajic, the author of the film “For King and Country” the Order of the Crown 3rd Class for the merits for the Royal House, the country, and the common good.

The exhibition “General Mihailovic – The First Freedom Fighter in Occupied Europe” will be open every day until 3 April 2015. All citizens who are interested to visit this interesting exhibition, may do so group tours, from 10:00 am with a mandatory notification by phone: 011 306 4000 or via e-mail [email protected]

The Royal Palace Fund would like to thank the Yugoslav Archives, the Archives of SASA, the Embassy of France in Serbia, the US Embassy in Serbia, members of the Crown Council academician Matija Beckovic and Mr Slobodan Markovic, Mr Miloslav Samardzic, Mr Branko Jevtic , Mr Aleksandar Colic, Ms Aleksandra Rebic and Mr Branko Petrovic from the United States for their generous assistance and contributions to the exhibition. 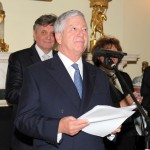 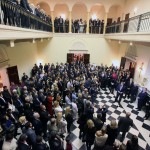 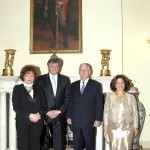