In the mid–thirties Matija Jama painted a number of scenes from Bela Krajina (the southern part of Slovenia). Rural scenes and landscapes, villagers and children were the subject matter of his works. Fascinated by the beauty of the countryside, the painter represented the inhabitants of Kolp, girls working in the fields, their intimate conversations, girls dancing, children playing, etc. There are no idealisations or allegories in his works. The figures of girls in white folk costumes with red embroidery, surrounded by the greenery of nature and the rhythmically arranged light, fervently describe the beauty of youth and childhood and their firm relationship to nature. Girl – Weaver is such one of Jama’s works: a village girl dressed in the well–known costume of the women from Bela Krajina is represented in an intimate atmosphere, preoccupied with her weaving. The stylistic characteristics, such as the scale of colours, composition of light and modelling of the figure, as well as the suggested atmosphere, classify this work among the best produced by Matija Jama

Matija Jama. – He was born in Ljubljana and in 1892 he went to Munich to attend the painting school of Simon Hollosy. When he returned to Ljubljana he dedicated his time to illustrations. He received a grant in 1897 to study painting in Munich. There he met Rihard Jakopič and they frequently painted Munich townscapes together. Several years later he travelled and painted through Europe. He spent the winter of 1923/24 in Belgrade and then settled in Bled. Before the outbreak of the World War II he lived and worked in Ljubljana. Jama exhibited his works in Ljubljana, but also at the First and Second Slavic Exhibitions (1900, and 1902). He exhibited in Vienna with the club Sava in 1904, and took part in the First Yugoslav Exhibition in Belgrade. 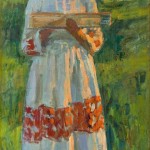