Their Royal Highness Crown Prince Alexander and Crown Princess Katherine are very grateful for the kind invitation of HE Ms Kate Smith CMG, especially since Greece is the country with which the Crown Prince has very strong family connections: HRH Crown Prince Alexander’s grandfather was a Greek king – HM King Alexander of the Hellenes, his mother HM Queen Alexandra was born in Athens and his grandmother was HRH Princess Aspasia of Greece (née Aspasia Manos). 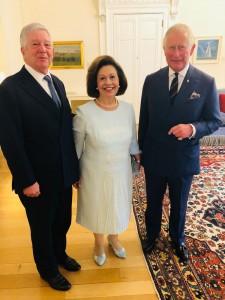