Archduke Karl of Austria at the Royal Palace

Previous Next
Archduke Karl of Austria at the Royal Palace

His Royal and Imperial Highness Archduke Karl von Habsburg is the President of the Pan-European movement of Austria, visiting Serbia as the guest of the European Wine Knights of Serbia. Before the meeting with HRH Crown Prince Alexander, the Archduke gave a lecture at Belgrade University Rectorate, on “The parliamentary system in the European Union and support for Serbia on the road to European integration”. He also had meetings with His Holiness Patriarch Irinej, President Nikolic, and the outgoing Prime Minister Dacic.

HRH Crown Prince Alexander and His Imperial and Royal Highness Archduke Karl of Austria exchanged views on the further integration process of Serbia towards the European Union, as well as other current economic and cultural issues relevant to the development of the South-East European region. 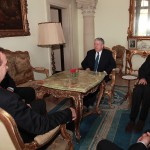