His Royal Highness Crown Prince Alexander was a guest of honour at the Academy in honour of 130th Anniversary of the birth of Dr Ludwik Hirszfeld Polish scientist and member of the Serbian Army in the Great War tonight in Belgrade. HE Mr. Aleksander Chećko, Ambassador of Poland to Serbia hosted this event.

HRH Crown Prince Alexander emphasized that Dr Ludwik Hirszfeld put his knowledge and great personal courage in the use of Serbian Army and Serbian people, and saved many Serbian lives during the war and at exile at the Corfu Island in Greece. He deserves that we always remember him as a great friend, comrade in arms and great scientist, as long as we exist as a Nation.

Dr Ludwik Hirszfeld was awarded the Order of White Eagle with swords III degree for his military merits for Serbia, and HM King Peter II, father of His Royal Highness Crown Prince Alexander, awarded him honorary citizenships of the Kingdom of Yugoslavia. 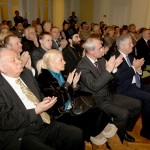