Their Royal Highnesses Crown Prince Alexander II, Crown Princess Katherine and Prince Philip, accompanied by academician Mr Matija Beckovic, member of the Crown Council, Mr Vladan Zivulovic, member of the Privy Council Mr Dusan Babac, and a member of the Crown Cabinet Mr Djurdje Ninkovic, attended the ceremony of marking the National Day of Serbia and the 210th anniversary of the First Serbian Uprising in Orasac. Ceremony was attended by Mr. Vladimir Bozovic, state secretary at the Ministry of the interior and Mr. Bojan Radovic, mayor of Arandjelovac.

The celebration began with Holy Liturgy officiated by His Grace Bishop Jovan of Sumadija and the clergy of Sumadija diocese.

In his speech, HRH Crown Prince Alexander II emphasised: “Exactly two hundred and ten years ago, at this place, the most prominent Serbs came to a decision to begin the uprising against the Ottoman occupation. They chose Karadjordje as their leader. Here in Orasac, it is a right place and a right time to remember them all and to thank them. This place keeps testimony about courage and vision that our fathers have had. It is great moment to say that we today are aware of the importance of their achievements, and that we find an inspiration in their deeds for the steps we have to make as society in the future. We speak with pride today about Karadjordje, but we also remember and look upon Dositej Obradovic, Vuk Karadzic, Tesla and Mihailo Pupin, Isidora Sekulic and Ivo Andric, Paja Jovanovic and Nadezda Petrovic, Stevan Mokranjac and many others. Let these great people of our nation be our inspiration in the future. Therefore our past will be pledge for a better future. For our children, for us, for our society, for our Serbia”.

After that, Their Royal Highnesses Crown Prince Alexander II, Crown Princess Katherine, Prince Philip and the members of the advisory bodies of the Crown attended a memorial service in the church of St. George in Oplenac, officiated by His Grace Bishop Jovan of Sumadija. Then His Royal Highnesses Crown Prince Alexander laid a wreath on the tomb of Karadjordje, the Supreme Leader of the First Serbian Uprising. The wreath was also laid by Mr. Dragan Jovanovic, mayor of Topola.

Later in the evening TRH Crown Prince Alexander II, Crown Princess Katherine and Prince Philip will attend a reception on the occasion of the National Day, hosted by the Serbian President HE Mr Tomislav Nikolic, at the Presidency. After that, Their Royal Highnesses will attend a concert by the Royal Strings of St George, the orchestra under the auspices of HRH Prince Philip, which will be held in Sabac, in the theatre “Ljubisa Jovanovic”. 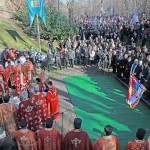 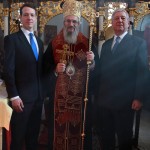 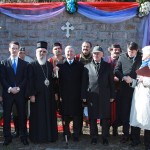 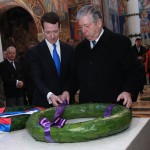 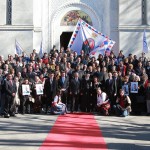