Their Royal Highnesses Crown Prince Alexander II and Crown Princess Katherine attended this evening a Holy Mass at the Roman Catholic Cathedral on the occasion of the first anniversary of the election of His Holiness Pope Francis.

The Holy Mass was presided over by HE Msgr. Dominique Mamberti, Secretary for the Relations with the States of the Holy See, in the presence of HE Msgr. Orlando Antonini, the Apostolic Nuncio, HE Msgr. Stanislav Hocevar, Roman Catholic Archbishop of Belgrade, His Holiness Patriarch Irinej of Serbia accompanied by Bishopsand other representatives of Serbian Orthodox Church, members of the Diplomatic Corps in Serbia, members of the clergy and numerous citizens. 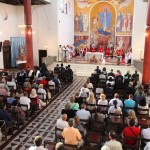