February 2015 – Vases by Ivan Meštrović at The Royal Compound

Vases by Ivan Meštrović at The Royal Compound

Vase with Representation of Reapers, 1933.

Vase with Representations of Archers on Horseback, 1933.

Two bronze vases with bas-relief representations were commissioned from the artist in 1933, as ordered by His Majesty King Alexander I of Yugoslavia. They were made after the marble vases Meštrović produced for his patron, a Viennese oil magnate. One of them has representations of reapers and ploughmen and recognizable symbols of fertility, and the other with representations of horsemen. The iconographic solution, flatness and linearity resemble antique Greek relief plastics. This reference to classical art and motifs, and the topic of warriors is founded on the idea of a universal symbol of struggle for general peace and unification. A pendant to this representation is the relief on the first vase with scenes of reapers and ploughmen as symbols of harmony, fertility and affluence. Reliefs on the second vase represent soldiers as well as the creators of Yugoslavia and the concept of Yugoslavism.

Ivan Meštrović.- Born in Vrpolje, Croatia he was first an apprentice in the stone carving workshop of Harold Bilinić in Split. In 1901 he enrolled in the Academy of Fine Arts in Vienna, where he stayed until 1906. As a student, he exhibited with Viennese artists in the group Secession, which won him a flattering recognition. From 1908 he worked in his studio in Paris where he created the major part of the works intended to the grandiose project of an architectural – sculptural complex called the Temple of Vidovdan. These works were exhibited several times, but the highest recognition was the first prize for sculpture at the World Exhibition in Rome in 1911. Meštrović spent four years in Rome studying antique sculptures. He was enchanted by Michelangelo whom he considered the greatest sculptor of all times. During World War I, in 1915, he had an exhibition in the Victoria and Albert Museum in London. After the war he moved to the newly created Kingdom of Serbs, Croats and Slovenes, where he became a professor, and later director of the Cultural Institute in Zagreb. 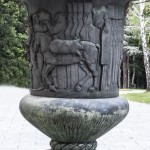 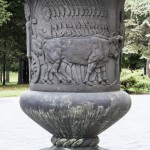 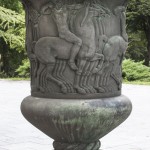 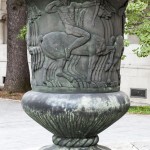