TRH Crown Prince Alexander and Crown Princess Katherine accepted the invitation from HM Queen Elizabeth II to attend a Thanksgiving Service for the life of His Royal Highness Prince Philip, the late Duke of Edinburgh, which will be held at Westminster Abbey in London, on Tuesday, 29 March 2022.

This commemoration will be held to honour the life and legacy of HM The Queen’s consort, 11 days before the first anniversary of his death. Almost all Royal Families of Europe, including the Royal couple of Serbia, have confirmed their attendance at the Service, which will be the first gathering of the Crowned heads of state at one place after a long period of time. Covid-19 pandemics made it impossible for people outside of the Royal family of the United Kingdom to attend the funeral of the late Duke, and this will be the opportunity for his closest friends and relatives to pay their respect. Attendance at the Service of Thanksgiving will not be open for the public, but by invitation only.

The late Duke of Edinburgh was a cousin and a dear friend of HRH Crown Prince Alexander and the Royal Family of Serbia. Prince Phillip was a son of the Greek and Danish Prince Andrew, the brother of the Greek King Constantine, the maternal great-grandfather of Crown Prince Alexander. He was the husband of HM Queen of the United Kingdom and the other Commonwealth realms Elizabeth II, Crown Prince Alexander’s godmother. For Serbian people, “kumstvo” (which is a word that jointly represents both relations when somebody is someone’s godparent at baptism and/or best man/maid of honour at the wedding) is a sacred relation, which is considered either equal to or sometimes even more important than the “blood relations” of a family.

HRH Prince Philip, the Duke of Edinburgh, died on 9 April 2021, at Windsor Castle at age of 99, being the longest-serving Royal consort in history. Serbian people remember that he, together with his son, HRH the Prince of Whales, Charles, was a member of the English Society of Friends of the Holy Mountain (Athos in Greece) and that he was one of the largest benefactors of one of the most important monasteries of Serbian Orthodox Church, the Holy Serbian Imperial Lavra Hilandar, which is located in Holy Mountain Athos in Greece, especially in the difficult period after the terrible fire that damaged this sanctuary in 2004. 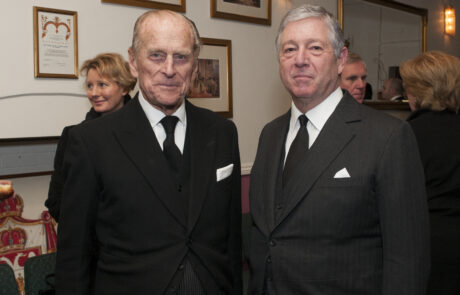